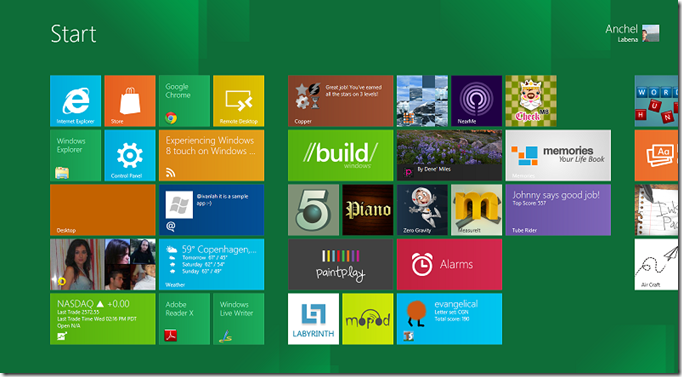 Alright, so here I am! Writing this blog post straight from Windows 8 running on my laptop!

Some people have already asked me to write a first impressions review of it, and I sincerely couldn’t wait any longer, so here I go!

First of all let me state that I began testing Windows 8 through virtualization with VirtualBox from Windows 7, but that set-up made the entire OS feel clunky, not to mention that VirtualBox doesn’t natively support running screen resolutions that aren’t 4:3, and that totally changes the Windows 8 experience. You see, this is an OS that has been thought from the ground up to work best on widescreen.

So what I’m running at this moment is Windows 8 in a separate partition. Not to worry for those of you who might want to test this out, since this also installs a new boot manager (with Metro style to it!) to choose which OS you want to make your default and lets you change it every time you restart. Simple and easy.

Also this is still a developer preview. Not a beta even, it’s more of an alpha state. Microsoft still has lots of work to do especially in relation to the user interface for those of us without a touch screen.

In fact, let me state it clearly: the new Metro UI, at least the way it is right now, is definitely not as usable for mouse and keyboard.

It’s nothing that can’t easily be fixed though. You see, Windows 8 makes heavy use of the panoramic view that has proven to be so usable on Windows Phone 7. That is, an incredibly wide screen full of content that you can scroll left and right. It feels so fresh and clean versus the standard vertical view of most apps these days that it definitely makes a difference. On a tablet, this is absolutely perfect: you simply swipe left or right to view more content. 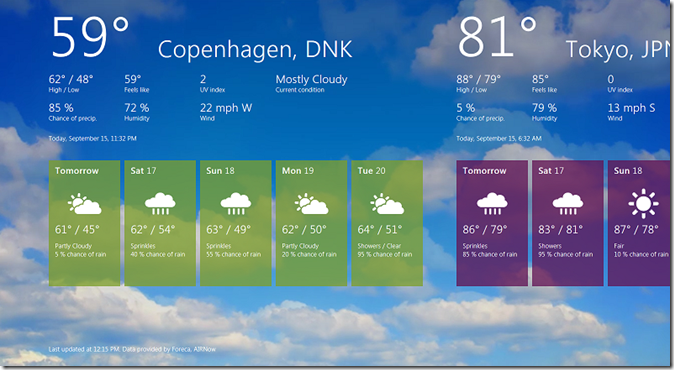 The weather app doesn’t scroll well with mouse/keyboard, but it’s Oh So Beautiful!

On a normal laptop though, you only have the mouse and keyboard. Some screens like the start screen seen at the top of this article let you use the scroll wheel of the mouse to quickly move horizontally (yes, you use a vertical scroll to pan horizontally…) but some other apps like the weather one just don’t react at all. And even with the touch-pad (which I updated with Synaptic’s latest drivers) it scrolled reeeeally slow when using two fingers to scroll sideways. It just needs a lot of work and I expect Microsoft to fully

As expected all the metro apps run in full screen. I’m sure most if not all Windows power users will scold at this because it takes too much screen real estate, but I can imagine how the majority of users will love how beautiful and clean these look. Reading articles from the included RSS Feed Reader is such a pleasure! 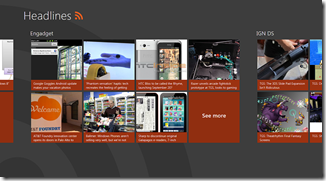 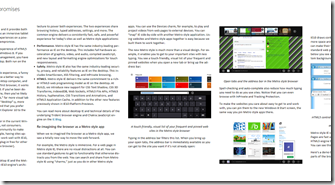 There’s absolutely no distractions, and feeds get their content automatically organized and laid out in a newspaper-like way while still allowing users to save pictures and watch videos, all in the same screen. In that sense, the Metro UI is clearly a winner.

In any case if a user wants to stick to the tried and true user interface that we’ve had since Windows 95 (with the latest Windows 7 additions) he still can. It’s as simple as clicking on the Desktop tile in the start screen. Or the usual Windows Key + D button command. In fact, applications from previous Windows generations will launch in desktop mode when clicked. Essentially the desktop is one more app in its own. An example can be seen with Windows Live Writer (which I’m using to type this review) or Google Chrome. Chrome can even work as a Windows 8 app if you wish so by having it run in full screen mode. 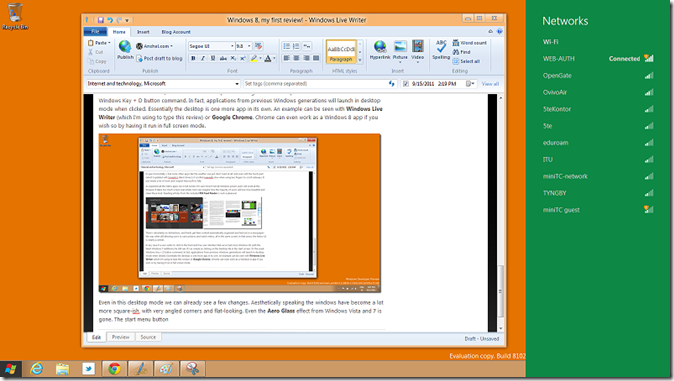 Even in this desktop mode we can already see a few changes. Aesthetically speaking the windows have become a lot more square-ish, with very angled corners and flat-looking. Even the Aero Glass effect from Windows Vista and 7 is gone. The start menu button (which looks totally out of place with its black border right now) brings up the tiled Start Screen and toolbar icons like the network options brings up a metro-esque sidebar, all fully animated.

That’s not to say that the change to the desktop mode isn’t very jarring. In fact it still clashes way too much with the rest of the Metro UI. I hope Microsoft can improve on this as much as possible, with small things like having your desktop background and theme color match with those of the Start Screen for coherence purposes.

I will give Microsoft a big applause for one thing though: Windows 8 is now totally cloud-oriented. When you first log in to Windows it asks for your Windows Live ID (which, if you have Messenger, Xbox LIVE or Hotmail among others you already have one). Once that’s done, it will sync all of your apps, settings and so on. For example I had already made some changes to the OS when I was still running it through virtualization. When I run Windows 8 later on in my second partition though, it synced those changes, even the placement of my tiles. That was definitely very neat! Of course Google’s Chrome OS already does something like this, but it’s nice to see it so well integrated within Windows.

As for stability, Windows 8 is doing very well so far, considering that this is still a very early preview. Of course I still get some random lock-ups, especially in the Metro apps. And for some reason my laptop can’t log off properly. But those are things I’m willing to let go in a preview build.

I seriously think that Microsoft is up to something really nice here. It’s showcasing an OS that runs perfectly well on both desktops, laptops and tablets, with a refreshingly new UI that keeps consistency between its other platforms (mainly Windows Phone 7 and the future Xbox 360 UI update) and an exciting new set of features. 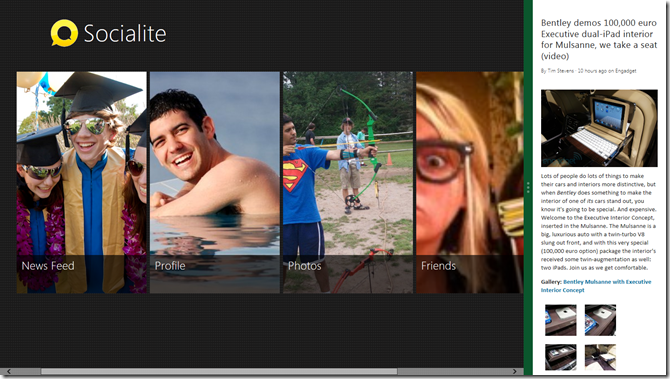 And I still haven’t even talked about some of its new features like running apps side by side, the new Windows Explorer, the much-improved task manager, the included demo apps and much more!

Will this become my new day-to-day OS? Not yet. This is pre-release stuff guys, and as such it’s too compromising for me to keep using it as my sole OS. As such I’m moving back to Windows 7 while still keeping Windows 8 on the sidelines to try new things every now and then. But so far I love it! Keep up the good job, Microsoft!