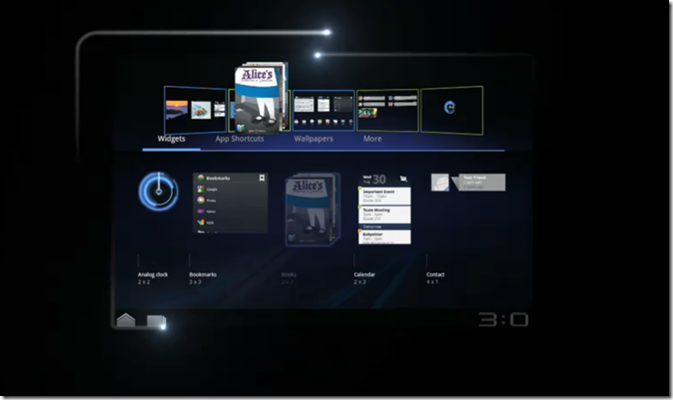 It looks like Apple has got on the wrong side of many technology companies!

With the huge success of Apple’s iPad it’s no surprise that others would follow in their footsteps and release tablets of their own. But it hasn’t been until Google’s announcement of Android 3.0 Honeycomb, Google’s foray into tablet-specific OSs, that hardware makers see a strong chance to get a slice of Apple’s juicy cake it had taken for itself.

Mind you people, tablets are great devices, although they are usually not absolutely necessary to anyone yet. But hardware makers do not care about that and will still continue to flood us with tablets of all kinds (do I already fear a market saturation?).

In any case at least two companies have seen very fitting to tackle the Mac people by directly stabbing their backs.

“The war is not over”? “Optimus will destroy evil!” pronounced right as the “good” robot smashes the brushed aluminium one into a building with a red apple painted on it? The “good” robot crushing an apple in his hand? Talk about being subtle… This is an Apple criticism all the way down!

You have to give it to the LG people though. The commercial is hilarious, with lots of references to the Transformers movies (DreamWords LG, Padmount, directed by Michael Boy and Steven Spillback as executive producer, among others).

But that video is not all there is out there. Motorola also showed a commercial for their upcoming Motorola Xoom tablet during the Super Bowl. It’s premise? To make fun of all the Apple fanboys who all look the same. Watch below!

This video doesn’t lack any Apple references either. Everything from the 1984 book the man is reading to the white iPod-like earphones everyone else is holding to with their hands. The irony here is that while Apple begun their first commercial by criticizing how everyone was using the same computer and they needed to be different and break free, Motorola now brings up the fact that it is now Apple who has assumed the monopoly spot.

Watch out Apple! You are no longer the only worthy competitor in the tablet space, and your new opponents are looking forward to hit you hard with revenge!