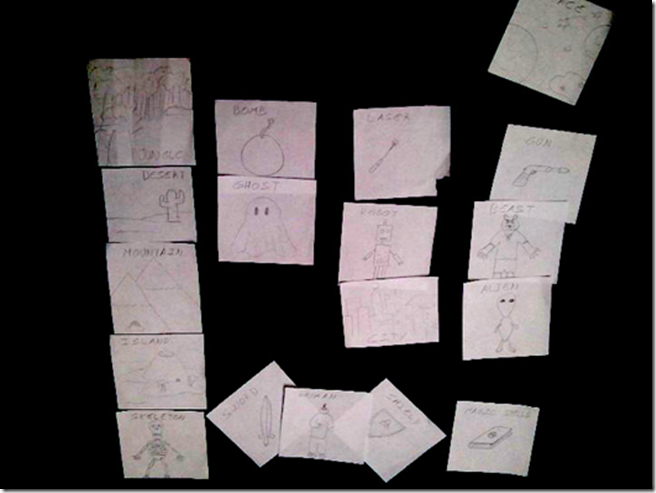 Sometimes you just have no ideas at all when you want to make a game. At least not when you need to create a game for a very specific target audience. And, as mentioned in one of my previous posts, this audience is Stine.

Luckily there are a lot of tools that can help a designer come up with something interesting, and one of my favorites we have learned so far in my User Experience & Prototyping course at the IT University of Copenhagen is the Participatory Design Game, or PD for short.

The objective is very simple: in short it consists of creating a short and simple activity that will open up the creativity of your “muse” you’re creating the game for (Stine) and give you ideas of what she will like.

Martin Ørbæk and I created a card game designed specifically for that. Each card has a concept drawn in it, be it a game character, an environment or a weapon or item. These concepts can be combined together to make even more concepts. For example, you can combine a gun with a laser, and you get a “laser gun”, or put together space and an island, and you get a “space island”.

But it is not us who were supposed to combine those. It’s Stine who had to play the game, drawing cards one by one from a pile, all facing the table, and combine those concepts as she sees fit to her liking.

As such Stine showed me her taste and preferences when it comes to videogames. She quickly dismissed certain ideas like those of a monster or space (she doesn’t like space travelling or spaceships, but can live with a game that takes place in space), while preferring environments that would be interesting to explore.

I found it funny that she didn’t use the skeleton card as an enemy, but rather as a remain of a dead body in a desert island, which fueled her interest in discovering how that person died.

A few more cards drawn later, she told me the story of those skeletons: they became ghosts. But not just any type of ghosts, those were explosive ghosts (by making use of the bomb card).

It’s very easy to make a story with Stine around, she doesn’t simply combine ideas. Instead she creates a full world breathing with background stories and interesting characters (the protagonist is a small boy with a sword and a shield who can also conjure spells, but he doesn’t really know how to use them).

It’s a very interesting take on starting a new game as a designer. You’re no longer thinking about doing what you would like to do, but rather making the ideas that she likes into a fully realized game. And it is something that I intend to see through to the end for this course.