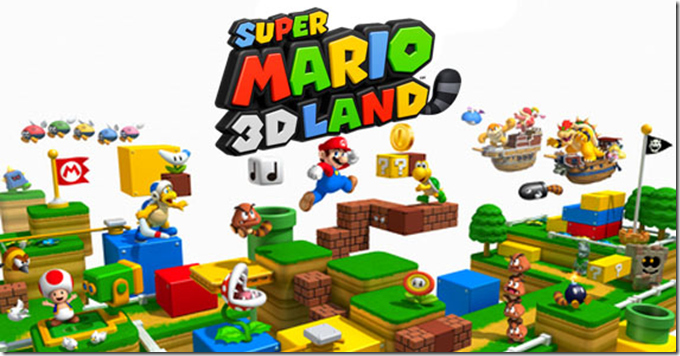 I wonder why I never wrote this review earlier (probably a lack of time) but it’s one I’ve been meaning to do for quite some time now.

In any case, here is a review for what I find it to be, at the moment, one of the most compelling reasons to own a Nintendo 3DS: Super Mario 3D Land.

While many will scoff at the idea of *yet* another Super Mario game, those who have played the Italian plumber’s latest games will probably know that the franchise has been doing extremely well in the past few years. Titles like Super Mario Galaxy 2 gave a new twist to the tried-and-true star-collecting and exploration formula started in Super Mario 64 (and later on copied by countless games of that generation) while New Super Mario Bros. Wii kept the gameplay strictly 2D for those who preferred more linear action.

Super Mario 3D Land has managed to get the best of both worlds into what Nintendo’s marketing has called “a 3D Mario game that plays like 2D”. Does that mean the game is a 2.5D platformer? Nothing like that. If anything the game plays like the special levels of Super Mario Sunshine where you had no water jetpack or the more straightforward stages of Super Mario Galaxy. That is, the levels are always in full 3D but the path is usually very linear, making it easy to know where you have to go (tip: always move forward and you will find the flagpole at the end of the level). 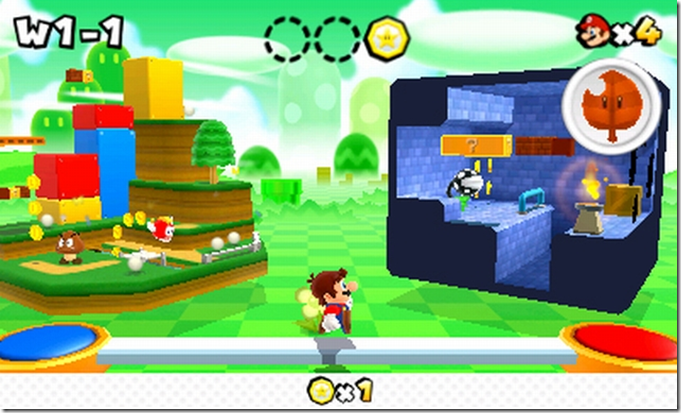 As such levels tend to be very short, which is great for gaming on the go when you just have time to beat one level, save, and leave the rest for another time. In fact level progression is classic Mario: beat one level, move to the next, until you reach the final castle and move on to the next world.

But man, are those levels amazing! Each one feels like something absolutely different from the rest. Not because of the environment, but because of the challenges which always manage to stay fresh. While at first the game is quite easy and everyone except the most novice gamers will probably breeze through them the difficulty ramps up quite nicely once you’ve reached the first half of the game (and, surprise! The first half of the game is NOT world 8-8, since there are 8 more worlds to visit after that).

The gameplay, unlike most Mario 3D outings where he had a life bar, goes back to the classics. Get a mushroom, grow big. Get hit, revert back to being small. Get hit once more… and die. Power-ups like the Fire Flower and the Super Leaf (which transforms you into Tanooki Mario) add an extra hit to Mario, along with newcomers Boomerang Flower which allows Mario to throw boomerangs, and the propeller box. 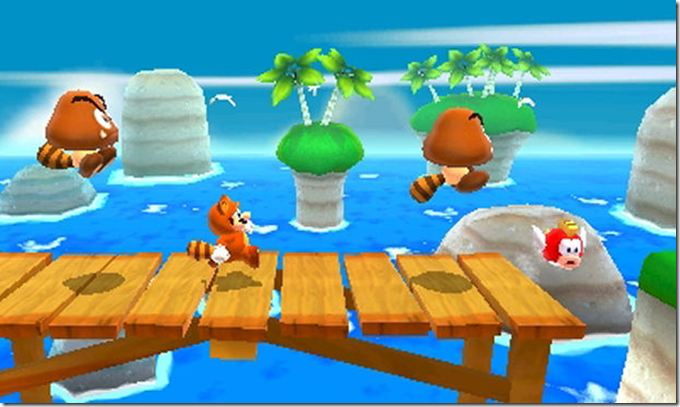 Graphically the game looks colorful and lively, with detailed characters and enemies in big numbers, though these blown-up screens are probably not going to help give that impression. Don’t forget that this game is meant to be played on the much smaller Nintendo 3DS screen!

And talking about the 3DS, this is one game that makes stereoscopic 3D a worthy addition. Since the player will have to move Mario in a somehow linear 3D space from left to right, viewing enemies in their respective positions in the Z axis helps plan our movements. In fact I found myself temporarily disoriented when I tried to play it without the 3D once I had got used to calculating distances with the effect on. Some enemies will pop out of the screen as bullet bills fire towards you and Mario will leap upwards when the view is seen from an overhead perspective.

The game also makes use of other specific 3DS features like the gyroscope: once you get into a cannon you can aim by moving the 3DS around, which is far more precise than it sounds like. And… well, some story sections of the game prompt you to shake the handheld for some fun reactions. Then there’s the StreetPass feature, which will reward you with mini-challenges, items and new times to beat each time your 3DS crosses with someone else’s when you’re walking out in the street with the console closed, even if the people you cross with don’t have the game.

One extra polish factor is the music, which at first I thought would become bland and boring, but I quickly noticed myself humming to the game’s tunes even when I was alone. The main theme, which can be heard in the following trailer, is quite catchy, but there are also some other tunes which are pure throwbacks to previous Mario games.

In general the game lives up to its promises. It’s not a full exploration game but instead offers more contained levels which are quite short (though each one with 3 collectible coins that will put even the most experienced gamer to the test) but filled with fun moments.

If you’re a Mario fan then this one is a no-brainer. If you used to play Mario games but then moved on to other “more mature” games then this will be a really nice trip down memory lane while proving to be extremely original on its own. And for those who simply don’t play many games then this is the best chance you will have to pick up a Mario game that starts easy enough so that even those who would never touch a game console can beat a few levels without breaking a sweat.