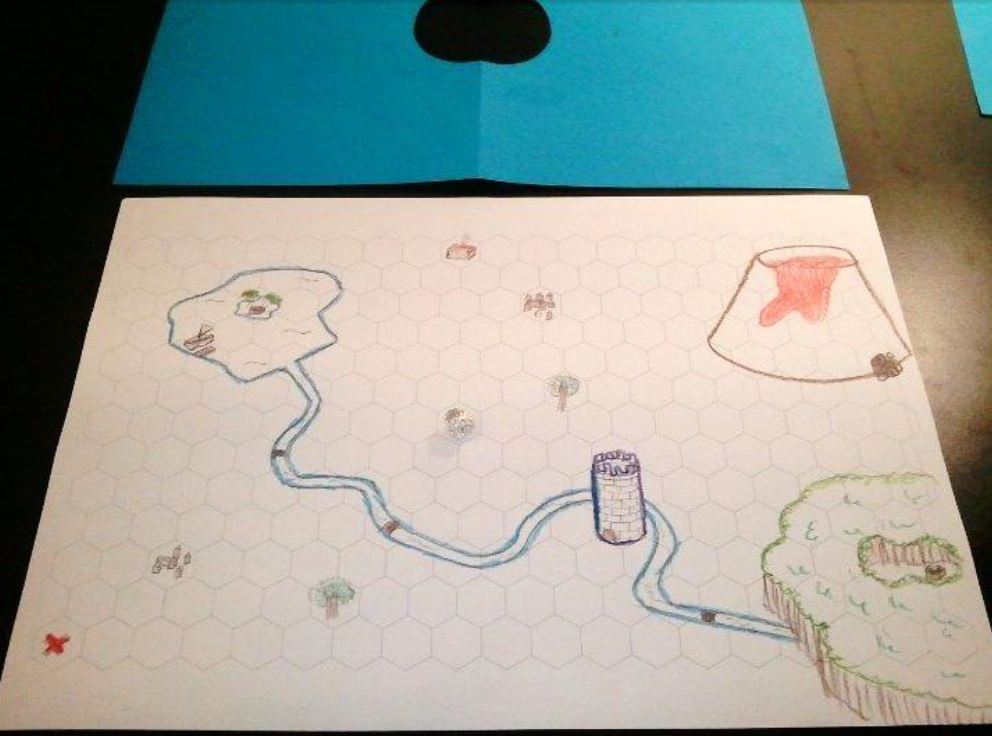 What you see here is the very first paper prototype of my game for Stine, the girl I am making a video game prototype for in my UX & Prototyping course. It might not seem like much at first, just a simple (badly) hand-drawn map on a hexagonal grid with a small ball of aluminum near the middle of the map (it’s kind of hard to see in the picture, but it is there).

So… what is the point of this map? Does it actually serve a purpose? Is it some kind of D&D game?

Not at all! This, along with some blue paper with a hole in it and a script that I have written get together to make a paper prototype that has actually fulfilled its purpose very well. Either that, or Stine lied to me when she said she liked it. 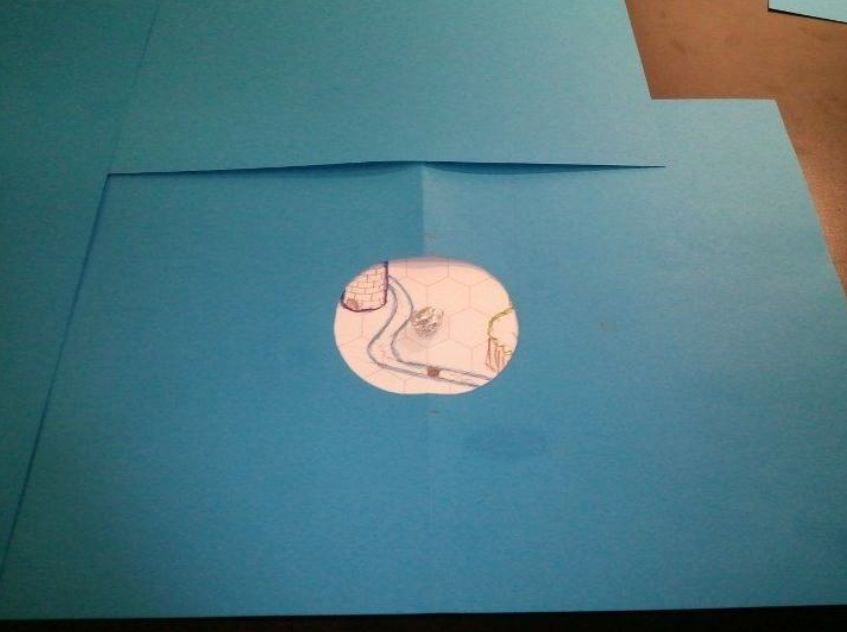 You see, this is what Stine actually sees when she plays my paper prototype. Just a very small area of a map, with the rest all covered with the blue paper.

I gave her some very simple instructions: her character (at this point still undefined) has to find her way through the map to reach a great wizard who has locked himself up in the top of a tower. What reason she has for finding the wizard I left it up for her own imagination.

The problem is that the door to the tower is locked shut and there is absolutely no way that she can break it or climb the tower. So she’s going to have to find her way through by exploring the map, talking to villagers and perhaps acquiring some equipment. After that, I told her nothing else and I just read to her the parts of the script that I had prepared for whenever she reached specific points of the map, like the villages, the lonely hut on the North side or the spot marked with a red “X”.

Why make a paper prototype like this? Because, as mentioned in previous posts about this project, Stine LOVES adventuring and exploring in games. So my intent here is to have her move around a game world of my own creation and see how she reacts, how she moves and how she thinks (aloud) while playing it. This will help me shape up the first digital prototype of the game and represents an important step forward into creating a game entirely from the feedback of another person.

And how did she do while playing the paper prototype? That’s a very interesting thing: it was totally unexpected for me. She REALLY believed herself in this game world and feared for the life of her character. For example, one of the villagers told her that a thief hides himself in a hut to the North. She needed the treasure that the thief had taken, but when she saw that the hut had smoke coming out from the chimney she decided it was best not to break in because she was afraid the thief might be in. Since she didn’t know if she could really die in the game she was trying to be very careful about it, and refused to enter the place, instead going out to explore the world some more and maybe coming back later.

There were also some funny moments. She found a lone tree for example, one that I had drawn there merely for decoration and to avoid the map being too empty. But she was disappointed that it was only decorative and expected something else out of it. So she… hugged the tree. Yes, that’s right. She felt like she needed to interact with the tree, so she hugged it. And not just once, she did it more times when she came across it, in case that could somehow affect the outcome of the story.

More interesting for me as pure feedback was that she re-visited some areas that she knew she had already completed to see if things had changed in a way. For example, she went back into the forest where she had already opened a treasure chest because there might be something new in it.

Another important fact was that she was expecting small details that could hint her about the game world itself, like footprints of some kind of animal (in fact she was disappointed that there were only human footprints around).

The final, very important piece of feedback I got was about the size of the map. Since the view she had was at all times very limited, this gave her a feeling of the world being much bigger than it actually was. This is something that I intend to apply in a very easy way into the digital prototype, which I will discuss later on, even though I have already started to code it (yes, me, someone who doesn’t know a thing about programming, is coding this game by himself…)

That’s it for now. The next step is to create an early digital prototype based on this paper one and making good use of the feedback I got from this. And I already have some neat ideas.