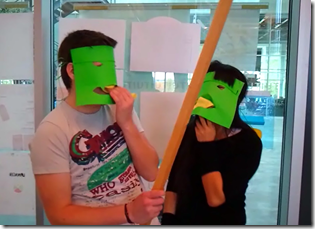 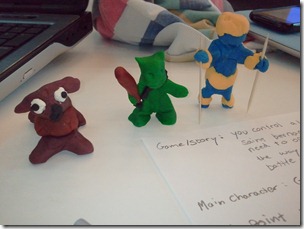 In what has probably been the craziest and funniest lecture for User Experience & Prototyping, today we learned about video prototyping. That is, creating a video that serves to test a design instead of creating a digital, coded prototype that would probably take more resources and time to prepare.

And of course a UX class is not the same if there is not a short time to experiment with the new methods learned, so today we got together in small groups to come up with a quick idea for a game… and video prototype it.

This time I worked with Morten Hansen and Lasse Hansen to create the Drunk Goblins video. Just the name and the two pictures above should give you an idea of how much fun we had working on it.

We used anything we could quickly find in the short amount of time we had (so yes, don’t expect the next Steven Spielberg production) from play dough and paper to foam to create a few set pieces that would be used to represent our idea of a game in which you control some goblins set on stealing all the brandy a St. Bernard dog uses when rescuing people up in the mountains (the St. Bernard being the restriction we had to use when coming up with the game idea).

With a few quick and extremely dirty editing touches (I didn’t even have time to take out the parts where you can hear us laughing while recording, or even saying “action”) we put up this short video.

Again, don’t expect anything big. But it’s good for a few laughs and, overall, shows up the potential of what a video prototype can do. Definitely a method worth giving another try!