“I am going to be sincere with you. I have gonorrhea”, said professor Miguel Sicart during one of his Game Design lectures at the IT University of Copenhagen. “I have gonorrhea, and I have brought it here with me to show it to you”.

As you can imagine, all of the class was startled, looking at each other at the impossible revelation.

Mind you though, this came right after Miguel had been taking out of his bag a Barbie doll, a teddy bear and a set of toy cars. So we were almost sure that there had to be some sort of explanation behind all of this.

And there was one indeed. Miguel took out from his bag yet another doll, called Gonorrhea. 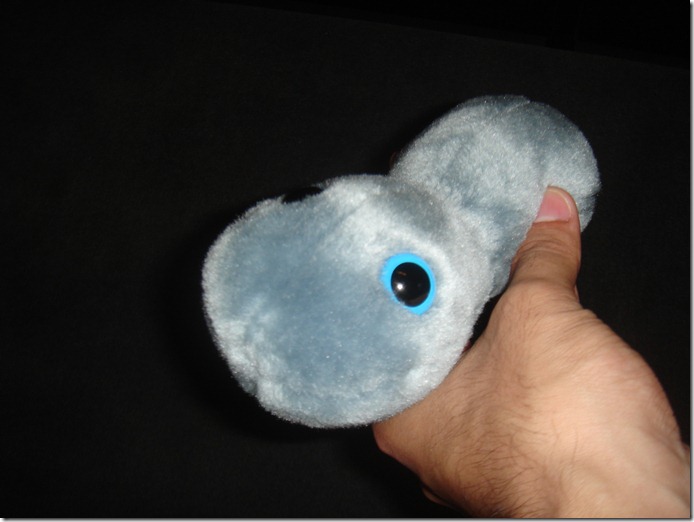 This plush little thing is Gonorrhea, and it’s purpose in the classroom was to prove an important point. That’s why the teacher asked us to “pass Gonorrhea around the class”, frequently asking “who had Gonorrhea” at that time.

Jokes apart, what Miguel was trying to explain was the differences between affordances and constraints. When creating a toy we have to create affordances (what people perceive is possible to do with the toy) and constraints (the designed limits of use for the toy).

A given example was the teddy bear. It was designed to make us want to hug it, to treat it with care. It has some constraints though, like not having the right shape or weight to kick it in football.

Something similar happens with Gonorrhea (and Black Death, which was shown later on). It’s a doll shaped like a germ, but its designed affordances tell us to hug it because it’s cute, even though the constraints tell us it’s not right because it’s a disease.

Point proven. And I want to have Gonorrhea as well! Too bad that Miguel took it back from us…