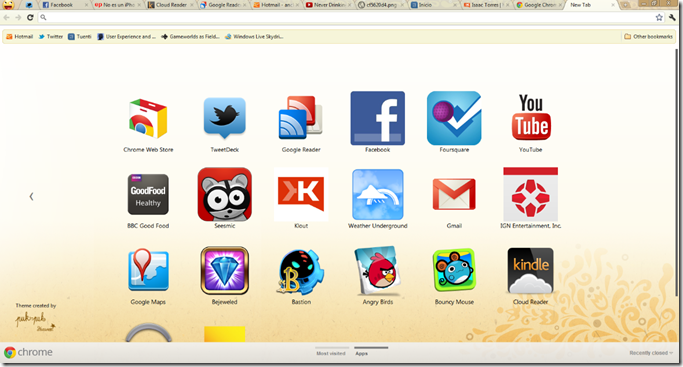 If you have been following my tweets, you probably know that I change web browsers on a constant basis. I really, really love the way the web has evolved in the past few years and I have been supporting several initiatives to get the web to work better.

But while I have most definitely used Google Chrome a lot, I have always had my second thoughts on it. It’s fast for sure, it loads pages correctly and it syncs my stuff online with other computers, which is awesome for those many times I have to format my computer or try some new device. But I kind of wanted to stay away from it.

In my quest to prove other browsers could be as good too I have heavily used Internet Explorer 9 (hey, it’s not as bad as many anti-IE users would like to make you believe), pinning my most frequently used websites to the taskbar in Windows 7, which made them work almost as if they were any other app in the OS. But eventually I would end up opening several tabs in these windows (like a link someone sent me on Facebook, or a picture in the Twitter window, or just web articles that link to one another…) and then I would have trouble finding out in which “application” I had this tab open, forcing me to look through all of them. Also the Flash plugin was giving me some hard time with it in my Nvidia Optimus managed laptop.

Alright, so let’s give Mozilla Firefox another try, I say! I’ve been a big Firefox supporter ever since it first came out as Phoenix in beta versions, recommending it to friends and family over the clunky and security-wise risky IE6. But over the years Firefox has become a giant monstrosity that acts slow, hogs your computer’s resources and, plain simple isn’t evolving as fast as its competitors. It took Mozilla an insane amount of time to deliver with Firefox 4, and though they have now changed the release schedule to something more similar to Google Chrome, the innovations are still not enough and, even then, it still feels clunky. So much for what used to be the fast browser out there…

I even gave Opera a fighting chance, with some features that quickly won me over like the new tab page’s active widgets, but it all ultimately fails when some websites don’t acknowledge Opera as a modern web browser simply because it still doesn’t include all the HTML5 standards that the big boys are pushing forward. And also it fails to render my blog properly.

As for Safari, this is as much as I will talk about it. It has the right support behind it, but that’s all it has going for it in my view.

So except for a few small players in the game the only option left here is Google Chrome.

And, let’s face it, Google has made here the single best web browser out there. It’s reliable, it’s standards compliant, it’s modern, it has extensions for all your needs, it’s simple yet powerful and, best of all, is designed to work whatever way you need it to.

But the thing is that Chrome has so many incredibly nice features built in right now that it not only has surpassed its competitors. It has already skyrocketed way past them. Heck, I even use Google Chrome as my standard PDF reader because it is much faster and stable than Adobe’s product!

And Chrome makes sure that your favorite websites act like true applications too! As you can see from the picture above, my new tab page is full of webapps, and I have TweetDeck pinned on the top left to be always open in Chrome. And all these icons, bookmarks and pinned tabs sync with the cloud, so that anytime I use Chrome in another computer (even on someone else’s computer through the new Profile Sign In feature) I have all my preferences right there.

Want to take things further? Google now supports by default their new Native Client technology. If that sounds just like fancy gibberish to you, all you need to know is that this new tech allows websites to run content natively on your computer safely. And this allows for deep, graphically intensive games like Bastion and Mini Ninjas to run fast and smooth, streaming only the data needed at hand from the web.

Google’s dream of a cloud-based OS has never been so close. Like literally I feel like I could do so many of my everyday tasks just on Chrome right now! And this comes from a heavy Microsoft Windows supporter…

I still have my reservations on allowing Google to take over my entire digital life, and Chrome OS is still lacking a few things that I need, but which are tremendously important for when the time comes. But as a web browser, Chrome is hands down, the best experience you will find right now for the web.