Well, it was actually finished about five days ago, but to tell the truth I had been busy with several other things until now that I’m finally home.

In any case, here it is! Our first group videogame at the IT University of Copenhagen, coming from Games’R’Us with Casper, Stine, Isaac and me!

Mr. Optimistic is an action-puzzle game in which the main character always walks forward. It is your job, as the player, to make sure that nothing gets in his way, removing harmful obstacles and covering gaps.

Go ahead and give it a try! Also don’t forget that the original purpose of this game is to fulfill the requirements needed for our Game Design course, which although they weren’t too strict, they needed to be met in a short time limit. 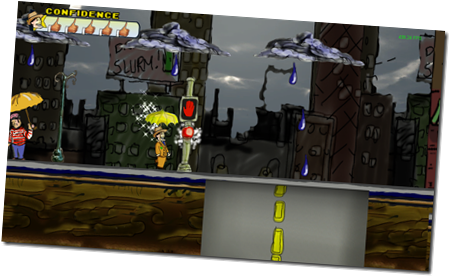 group, as well as all the testers who gave us their feedback (and helped improve many of the levels on time), and of course our partner group RoboMonkey, whose main character also makes a cameo appearance in our game.

Some weird bugs aside (which software developers will surely find from the get go) the game turned out fairly good, and we had some fun ourselves while making it (it’s funny how some of the most crazy ideas actually made it into the game).

So I will simply leave you all to try the game for yourselves.

You can play it online as long as you install the Unity Web Player (it’s a fast, quick and easy installation that doesn’t require much from the user) or download the install version. But for my blog I’m just going to leave the web version for the sake of simplicity.

Go ahead, give it a try! 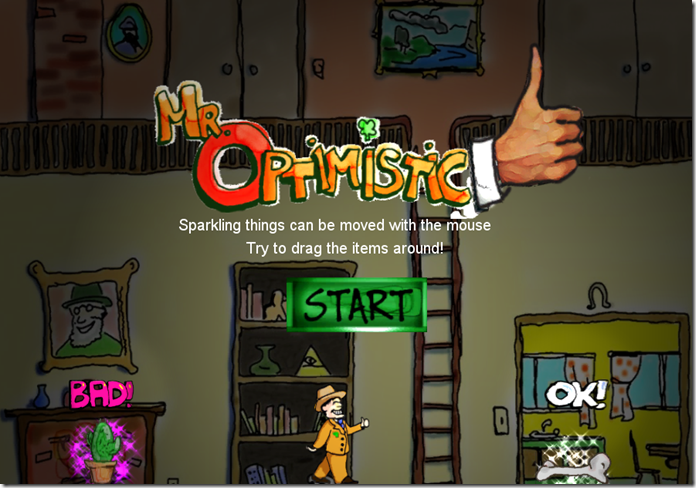 So while you still cannot try the full game (patience, my friends), you can toy around with our tutorial, which will already let you get the feel of our grabbing mechanics.

Our tutorial is presented in-game as the introductory screen, along with the game’s title. That way we ensure that all players are able to understand the controls without having to go through lengthy explanations or delaying the fun for the player, since we designed this tutorial to be a place where players can spend several minutes having fun on their own.

In any case give us your feedback in the comments section. Soon you’ll get to see the entire game! Sit tight!

So it begins! The final two weeks before Mr. Optimistic is ready for showcasing!

And it’d better be ready, because by December 15th, at 3:00 PM we can have no excuses. The game MUST be finished by that time!

We’ve gone through lots of changes everywhere, we’ve had playtesters giving us their input (thanks to all of you for that!), added a lot of new graphics, new game mechanics, better level design…

We hope to be able to show you something very functional pretty soon! 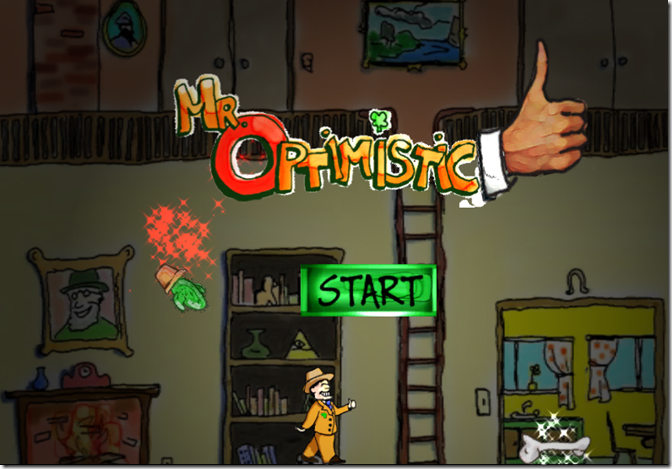 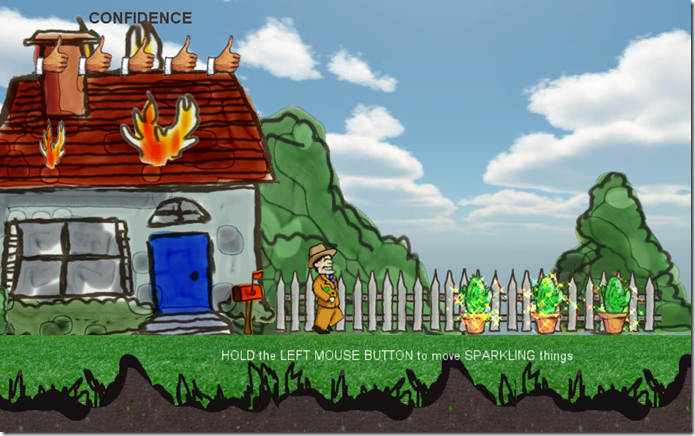 It’s all ready! The first level of our videogame Mr. Optimistic is good to go and you can now playtest it!

Don’t forget this is still a work in progress, so bugs might happen. We want you to try it out and give us feedback to improve the level (again, just the first level – the second one will play, but doesn’t fully work yet).

So give it a try and fill the survey afterwards! Thanks!

Well, here’s my first attempt at making a video developer diary for Mr. Optimistic, the short videogame we are building among a group of four people for a university project and that has been explained previously. The video shows some very, very basic game mechanics (and a lot of physics problems that are shown on purpose in the video and are currently fixed).

Excuse me for my terrible English accent in the video (my accent gets worse when it’s late). Hope you enjoy it! Don’t forget the game will be available freely to download around December 15th!

Little by little our videogame Mr. Optimistic gets better! We now finally have the first level laid out in our game engine (we’re doing this with the free Unity Game Engine for those of you who want to know), and even though there’s lots of things to polish (both on the artistic side and on the physics and enemy behavior side) we’re happy with what we have so far.

But let me introduce the team first.

Mr. Optimistic is being made by four people working as a team. We liked to be called Games’Я’Us!

We will keep you updated with news on our little videogame!