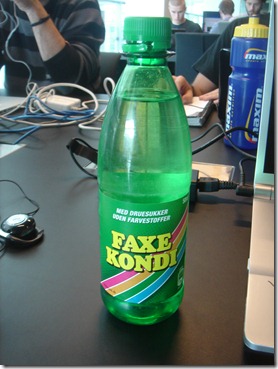 Almost two years ago I wrote a post about how addicted I was to this drink called “Pibb Xtra”, a Dr. Pepper clone very popular in North Texas.

Now, here in Denmark, I have found myself once again addicted to a soft drink (what do these have that get me to crave this things?)

This time it’s this drink called Faxe Kondi, and they sell it all over Copenhagen.

What does it taste like? Well, think of a mixture of Sprite and 7-Up, except that this one has a higher concentration of glucose and caffeine. In fact, it is marketed as a sports drink. What is more, it was invented by a Danish sports physician and football star!

Now, the funny part is that Coca-Cola, fearing the loss of a big market share (especially in Greenland, where it has a 33% market share of soft drinks with 42 liters drank per person a year), de 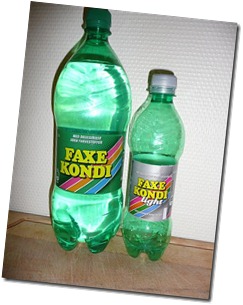 cided to compete directly against it, even though it already sells Sprite in the region. So what did it do? It got the license to create a drink with the brand of the famous Danish beer Carlsberg and created Carlsberg Sport.

One small detail: there’s two types of plastic bottles of Faxe Kondi, one of them (the one I took a picture of) has a more "worn out” look (I think it is made out of recycled bottles) and tastes slightly better than the normal plastic bottle, which is mostly sold in supermarkets.