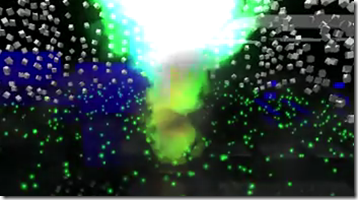 You’ve seen videos of a videogame we are developing in my group at the IT University before. This game was tentatively named Cylindream.

But projects move on, things change, and as the final deadline for our game gets closer (May the 18th) the game is finally taking shape under the new name of R.E.D., which stands for Rolling Explosive Device.

While I won’t get into the specifics of the game here just yet, I did want to share the awesome work Giacomo has done with the explosion effect.

As a brief explanation, just note that when the time is up the R.E.D. which you control in the game explodes.

And now, here is the first video of the cylinder exploding (mind that the glass ground we’re using for this test is not final, and was only chosen to showcase the explosion better):

Now though, the explosion effect would look much cooler if that expansive wave actually had some force to it, wouldn’t it?

Well, here is the same test, but this time with a lot of added cubes!

Again, these are still prototypes and do not reflect the current state of the game. Stay tuned for more!