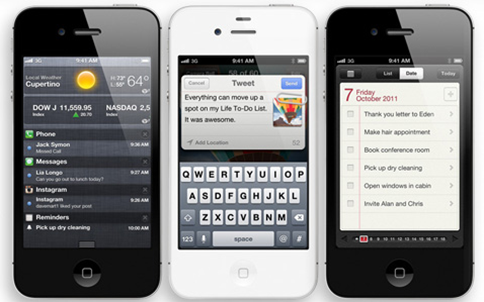 I had already posted this article in Spanish on the Technology section of VOANoticias.com but since I had this English version of the article ready as well I decided to publish it here for those of you who didn’t want to use an online translator for it. Without further delay, here it is:

It’s incredible the amount of media attention Apple can get. Even since the beginning of the year the rumor machines have been churning out speculations about what the future iPhone 5 would have. But as soon as news got leaked that the Cupertino company would present its latest in October, the expectations rocketed sky high: a bigger screen, a thinner profile, no home button, a revolutionary battery…

And Apple definitely deserves the high expectations. When Apple first announced the iPhone it was a real revolution thanks to its innovative multi-touch screen and its ease of use. A year later the iPhone 3G introduced the App Store, changing forever the way people thought of phone applications. The competition rushed to catch up with this new intruder in their own space but they always released incomplete products that were not up to Apple’s standards.

But now the competition has beaten Apple. So it is Apple who has had to rush to catch up to them.

Do not take me wrong. The iPhone 4S is an excellent smartphone that follows on its big brother’s footsteps design and functionality wise. But with such high hopes on the new phone the public was not expecting an iPhone 4S, but an iPhone 5. The number change is more than just a simple perception. The improvements against the previous phone are only, simplified, faster speeds and a better photo and video camera.

With all this, is it even worth paying up for it? The answer depends on our current smartphone.

iPhone 3G and 3GS users will definitely find a lot of worthy additions, since they will get an outstanding superior screen, a front camera for videocalling, HD video recording and fast and fluid apps.

But for current iPhone 4 users, who probably bought it less than a year ago, the purchase is absolutely unnecessary. Apple has given much publicity to its new A5 processor that gives the device faster speeds. But let’s be frank: the iPhone 4 was already a pretty snappy phone that is far from getting obsolete anytime soon.

More important even is that most of the improvements on the iPhone 4S are due to its new operating system iOS5. But the good news for iPhone 4 users is that this upgrade will be absolutely free for them starting October 14th by just plugging the phone to a computer with iTunes. These update includes among others a new notifications system and, in special, support for Apple’s new iCloud service. In this regard iPhone 4 users won’t notice many differences against the new device.

The only things they will miss are the powerful new camera (even though I insist that the iPhone 4 already has a really good camera) and the voice recognition software Siri.

It’s also important to take note that not everything spins around the iPhone. Precisely on the same week of the iPhone 4S presentation the Samsung Galaxy S II arrived in the States. This is a device I can seriously recommend as it is, in my honest opinion, the top of the line of smartphones and it’s about the same price as Apple’s latest iDevice.

And let’s not forget that this very same month Samsung will be announcing its next Google Nexus phone and soon after Finish company Nokia will reveal its Windows Phone 7 devices that it has been waiting for a long time to release.

Even with all that I insist: the iPhone 4S is a magnificent phone with really advanced features that will be a delight for many. Those who have never used an iPhone will be nicely surprised and older users will see in it a great product. But those who already have the iPhone 4 should definitely let it pass. Or look elsewhere for a new phone.

The original version of this article was published in Spanish in VOANoticias under the name VOA prueba Microsoft Kinect, written by me. 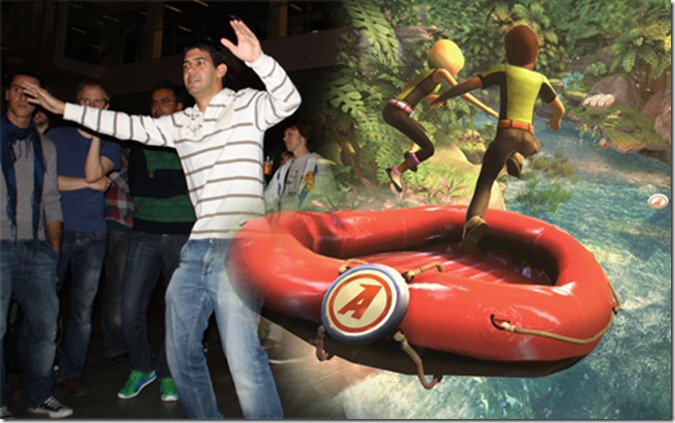 Up until now most videogames have been played with either a controller or a touchscreen. From the very first Nintendo Entertainment System (NES) until the recent Playstation Move. Now Microsoft proposes something different: playing games using all of our body with its Microsoft Kinect, the peripheral for Xbox 360 they unveiled in June 2010.

I had the chance to try it with a Microsoft Denmark representative, who showed prototypes of three of the games which will come out in November. Those are two game modes in Kinect Adventures and a volleyball game in Kinect Sports.

Microsoft Kinect consists of a small horizontal bar that you place under your TV. A complex system of cameras and microphones inside allow it to detect up to two players simultaneously. In contrast to previous technologies like Playstation’s EyeToy, which simply detected the silhouette of one player, Kinect is capable of detecting the entire skeleton.

This allows for some curious things like the following: in Kinect Adventures, a character appeared on screen to represent all of my movements. I tried to perform some dance moves and the character on screen repeated the exact same movement with arms and legs, even when I tried to do Michael Jackson’s famous “moonwalk”.

In fact the body detection works perfectly fine, even in the dark room we were in. Microsoft Denmark’s representative, Martin Essman, commented that the final version of those Kinect games will be able to recognize the player’s face so as to load his Xbox LIVE account and his avatar.

The first game I tried placed me in a raft on a river with several waterfalls. Another player got to my left and Kinect recognized him immediately, creating a new character in the raft, next to mine. To begin the course we both had to jump at the same time. Controlling the raft was easy: if we wanted to turn left we both had to lean to our left and vice versa to turn right. To jump, we just jumped at the same time. The objective was to collect the highest amount of coins placed along the course, and to get them we had to extend our arms towards the coin so that our avatar would do the same and grab them with his hand. Very easy and intuitive. One of the factors that made this game more challenging was the necessity of collaborating with the other player to jump and lean at the same time. It is easy to imagine how this game can be attractive to play for all the family. 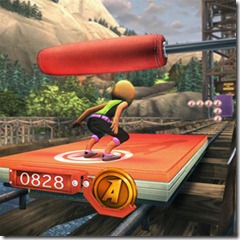 The next game had me playing on a mine-cart. This time to begin the game I had to grab two imaginary handles in front of me (represented on the screen) and pull them to get an impulse. From there on I could step left or right, crouch, jump and move my arms and legs to grab the coins along the ride. Both in this game and the previous one Kinect had been taking pictures of me at the moments when my moves were most exaggerated and then showed them to me after finishing the game. It’s definitely funny to see oneself jumping while extending one arm to get an imaginary coin. Besides that, the pictures had comments like “You know Kung-Fu!” or “Jumping non-stop!”.

The last game I tried, the volleyball one, was more simple: all the control I had over the avatar was to hit the ball. All the remaining moves were done automatically so as to avoid two players in the room hitting each other or running around the room like crazy. A small problem that happened from time to time was that if I moved out of Kinect’s viewing area the game, without stopping the play, would show me a message telling me to take one step left or right to re-locate me in a matter of seconds.

Of course the first batch of Kinect games are directed towards a more casual audience: those who are not used to playing videogames, just like Nintendo did in 2006 with the Wii. Microsoft assures that later on they will deliver more complex games directed to the hardcore gamer. Until then, the inclusion of Kinect Adventures (which has about 20 different games, the first two mentioned in this article among them) with the purchase of Kinect will provide several hours of fun, especially when played in group with friends and family.

Microsoft Kinect will come out on November 4th in the USA and Canada and on November 10th in Europe.

He’s been a plumber, a carpenter, a professional kart racer, tennis, golf, baseball and soccer player, and even more, a doctor. He’s more famous than Mickey Mouse, with a theme song recognizable in half of the world and he has become the biggest icon in the history of videogames. He is Super Mario Bros and he has just become 25 years old this week.

In my latest article for the Voice of America column Tecnomanía, I take a look at the origins of this famous character (and one of my personal favorite videogames ever). The article is currently only available in Spanish, but I will probably do a translation of this one into English as soon as my time (and my contract) allows me to.

You can read the full article here or watch the following video on the history of Super Mario. 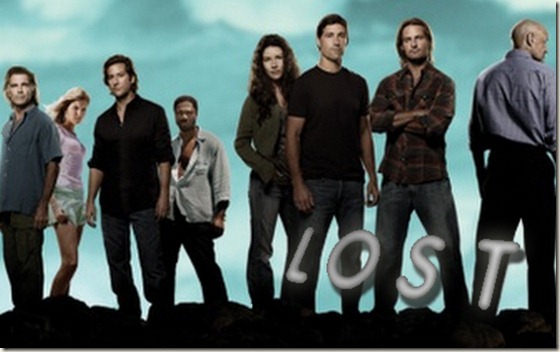