So today Samsung announced the next phone in the line of its successful Galaxy S series of Android smartphones.

Usually I applaud Samsung for their impressive smartphones, which tend to be among the best out there in the market.

But seriously… I think this time they are going a little bit too far. How big does a phone need to get to be called “better” these days? Does the size of the screen really matter that much? And how long is this trend going to continue?

I decided to make this stupid little joke on the increasingly huge size of the screens on Samsung’s phones, but this could easily apply to other makers too. Please mind that I put all this together really fast, though the phone sizes are proportionally correct between one another. 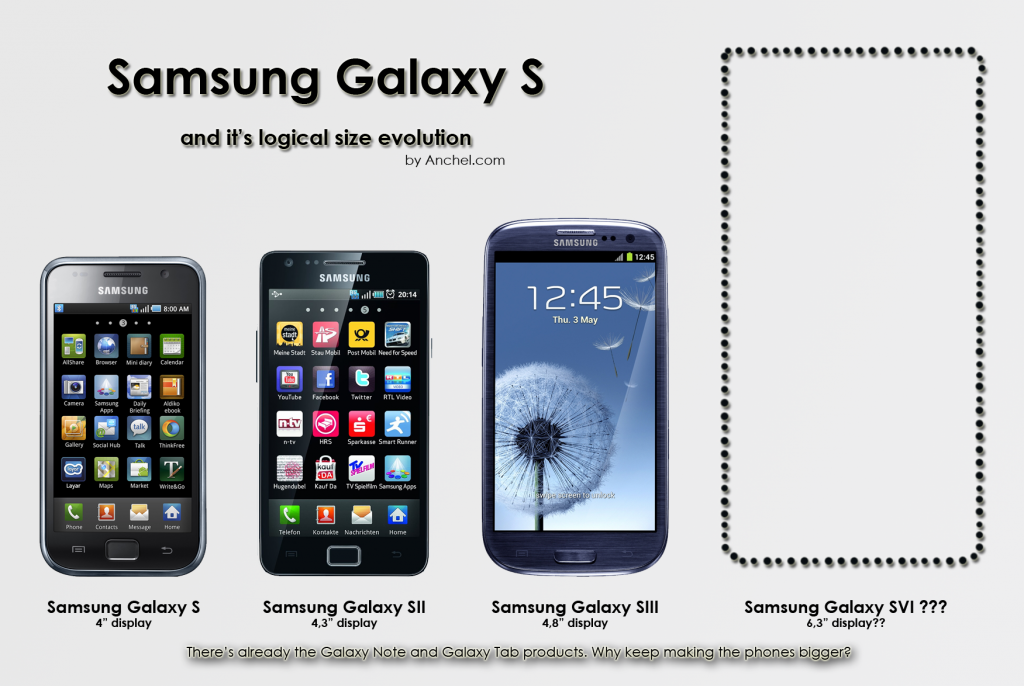 The funny thing is that, as I mention in the picture, Samsung already has a tablet/phone hybrid called the Galaxy Note (which as a tablet I think is quite nice, but as a phone I think it is simply too big for anyone to carry around in their pockets), and then they also offer the Galaxy Tab in several sizes.

So what will they do next? Will the tablets increase in size to make space for even bigger phones? Or will this nonsense of “bigger is better” stop someday?

As a disclaimer, I used to have a phone with a 4″ display (the Samsung Omnia 7) and I recently switched to a phone with a smaller screen: the Nokia Lumia 800 which has a 3,7″ display, and I’m quite happy with it, not needing more than that as it is a very comfortable size to work with.